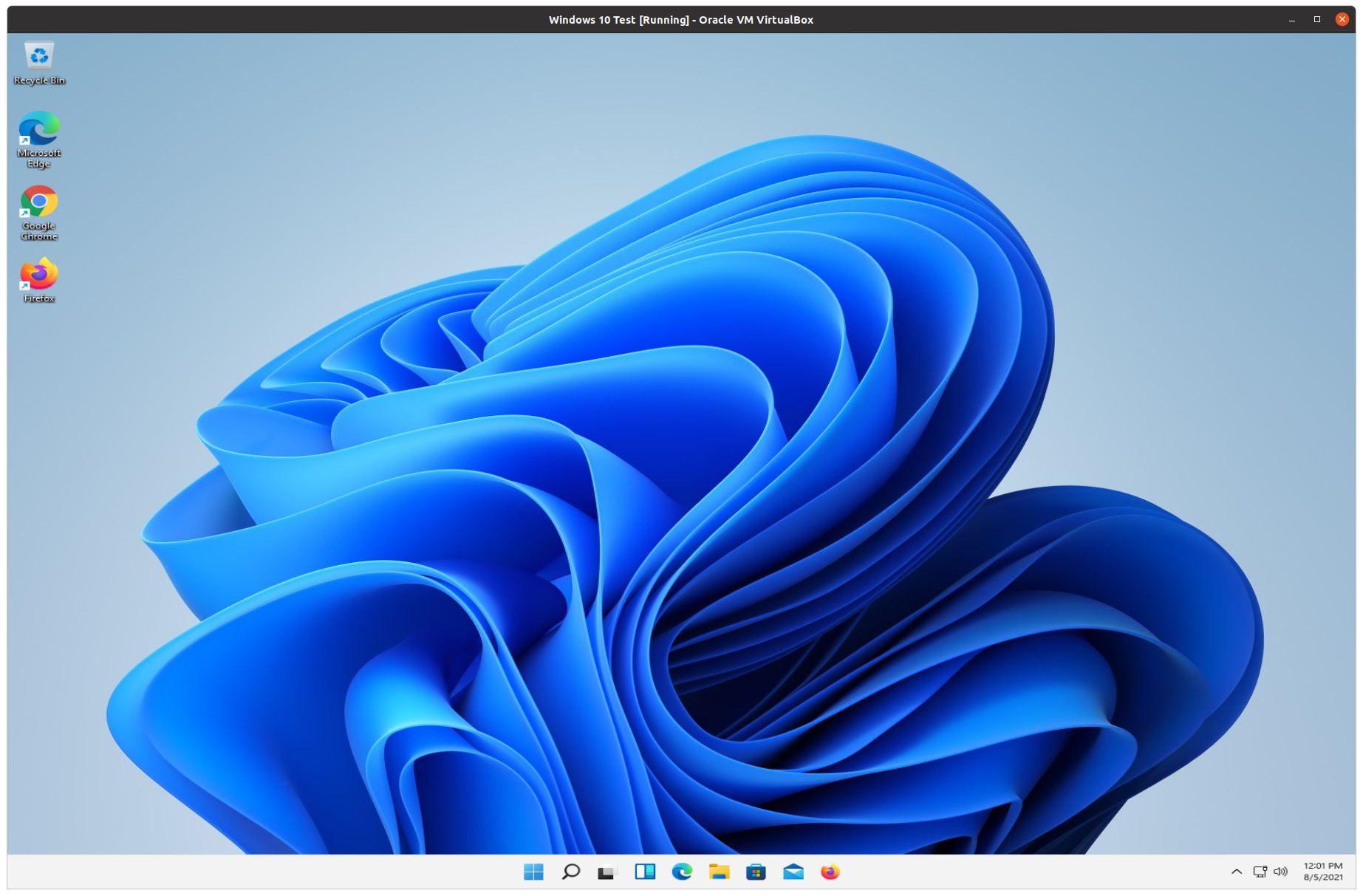 Microsoft announced Windows 11 recently and, in order to stay up on the latest and greatest, we decided to take a look at it. Keep in mind this is still a beta version. This means, there will be a good amount of changes before it goes live and is available to everyone. Because of that, you wouldn’t want to install it on an every day use PC or something in production right now. We still wanted to take a look at it and get a little insight as to what it will be like.

Obviously visible changes are what will be noticed the most. So let’s get started there..

The most noticeable change, which I have seen a lot of people complain about already, is the task bar and start button have moved to the middle of the screen. Yes, that is the default but it really doesn’t take much to move it back. You can get to the taskbar settings by right clicking on it, go to Taskbar behaviors, then change the alignment option. 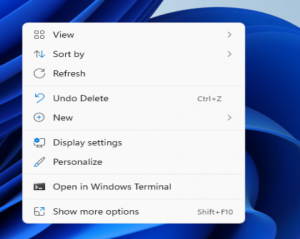 Rounded corners on all windows – While this seems like a minor adjustment, it is one of those things that makes it look nicer but you can’t put your finger on why until it is pointed out.

Icons and buttons have slight animations and effects. Again, this is something that may be under rated until it is experienced.

Themes and colors – So far the new theme options in the personalize settings seem pretty nice. There are very few wallpapers available at this time but I am sure that will change. You are still able to set your own wallpaper as well. 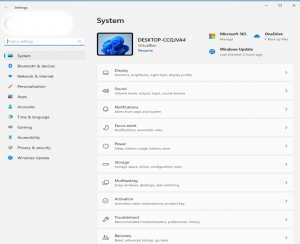 Settings menus and options – I haven’t spent all that much time in this area yet as it would be something that would come more with troubleshooting time. Otherwise there isn’t much to do in the settings. Once Windows is set up, you don’t typically need to go into the different settings options until you are troubleshooting a specific issue. However, I will say that it looks like more of a clean and organized look than it’s previous layout in Windows 10. 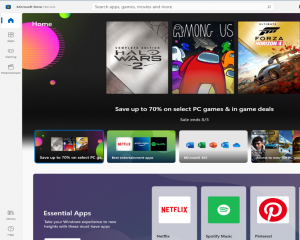 After reading a few articles and watching the promotional videos it seems one of the most talked about features is the new Microsoft Store and it’s ability to play Android Apps. I did some quick searching and it looks like there is a shortage of some apps. I was unable to find a few that I use currently, which may change as things progress.

To test a game I installed the Angry Birds 2 app and attempted to play it. I wasn’t super impressed as it slowed down the system a LOT. Granted, I was running this as a virtual machine and only gave it 4 processors and 8GB of RAM. Windows 10 doesn’t even run that great on those specs so I didn’t expect it to run great. I used those specs just to see how well it would do.

I also tested out the Netflix App which seemed to run a lot better. I do like that it is shadowing the Android version and allowing you to download videos to watch when you do not have internet access. This makes far more send to me to have on a laptop than on a phone. I just wish it had the ability to cast to a Chromecast from the PC app.

Microsoft Teams Integration – Its looking like Microsoft will be making a push to use Teams over other chat platforms. I am not confident this will roll out with the normal release but so far the update to Windows 11 includes a preinstalled Teams. I really like Teams and to be honest, I even use it on my Linux machines. However, I am not a fan of pushing software like that. When users are not aware that they have options, they assume they do not. This could potentially push out any competitors.

Better multi monitor support – This is something that I am extremely interested in. For people who work mobile and dock their laptop when they get back to their desk, they will understand the importance of this. Often I organize multiple windows across multiple monitors in a way that makes my productivity most effective. When I remove my laptop from the dock and roam around, reconnecting the laptop to the dock resets all of the positioning I had previously done. Don’t get me wrong, it doesn’t take much to put it all back but not having to do that is a lot better and less annoying.

There is also a way to snap windows to a layout by hovering over the min/max button and choosing the layout along with where you want that window to go. This is also something I really enjoy. However, at the moment, it looks like it only works on some applications as it doesn’t seem to work with my Firefox install. Hopefully they figure out a way to make it work across all applications and not reliant on each individual application developer to program that in. 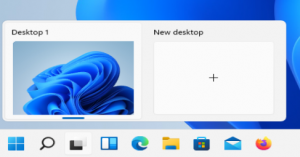 Multiple desktop – This is something that has been in Linux for a very long time. I also believe it’s been available on Mac OS for a bit now. Personally I don’t use this much but I can see how it can help others with productivity. It allows a user to organize the desktop and windows then switch to another empty desktop and set up another organization. This might come in handy if you were working on a Word Document or Presentation Document and want to switch back occasionally to a desktop with Teams or other collaboration software to talk to co-workers. Personally I just use multiple monitors for this BUT it could come in handy when on the go using just the laptop monitor.

Widgets – Microsoft removed the Tiles but is bringing back the widgets that were a previous feature of Windows 8, 8.1 and early versions of 10. Rather than having them right on the desktop they now have their own menu. Currently the widgets are extremely limited and mostly displays news stories. I think this is something some home users may enjoy but it’s not my cup of tea for sure.

Change – This is the biggest negative every time a new version of Windows (or anything for that matter) is released. There are a LOT of people out there that just do not like change no matter what. Some take some time to adapt then understand the change is better or at least was needed. Others won’t care and will go into it with such a negative attitude that it doesn’t matter the outcome, they won’t like it. Let’s try to not be one of those people and let’s try to give new things a chance. Especially when there isn’t much you can do once Windows 10 loses support or applications start requiring Windows 11.

New System Requirements – With every major change in Windows (sometimes even with the build updates) the system requirements change. Currently the system requirements Microsoft states is needed is WAY under spec. I believe those are minimum for the install but it certainly won’t run well on two cores, 4GB of RAM and 64GB hard drive. However, this is common for software providers to under spec and make it seem like it runs on hardware that it has no business running on. While this is a negative, I don’t believe most people will have an issue with the requirements. It seems to run the same as a Windows 10 VM with the same specs according to my testing.

I don’t have much negative to say about Windows 11, actually. In all honesty I feel like these changes could have been made as a normal build update. They could have even given the option to revert the visual changes back, or making it optional. That is, IF they wanted to cater to the users that are not comfortable with change. Even the update from 10 to 11 didn’t seem as big and painful as a normal build update.

As for the new look, personally, I like it. I enjoy applications that have a fresh and smooth design. Ones that keep up with the current styles. Look back on images of Windows XP and you can see how dull it used to look. Microsoft seems to be catching on to more of the design side and I don’t hate it so far.

I never really cared for the way Windows 10 was trying to get you into the Settings app instead of using the normal flow of the control panel. I used to think this was because I was oldshool and not willing to get used to the new way of changing certain settings. Which made me happy that most of that is still in Windows 10 and 11. However, even after just a few minutes of looking around in the Settings options within Windows 11, I am a bit impressed. It will still create a learning curve as I am used to the oldschool way BUT I don’t hate it nearly as much as Windows 10.

I do not see any benefit to this on a business end. Even our Small Business Clients don’t seem to care much about the design, layout, etc but more on the functionality. If the Windows 11 upgrade raises the system requirements too high, this could have a negative impact on Clients that like to continue to use old hardware in order to same some money.

Again, keep in mind this is not a full release so some of this may change over the next few months. As may my opinion.